Do not miss the Esterhazy palace in Fertőd, if you visit Sopron! 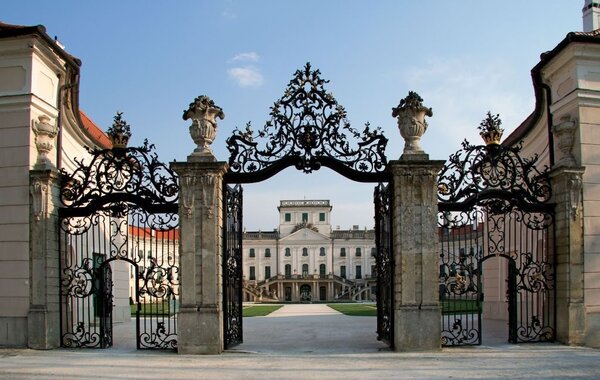 „What the Emperor can do, I can do, too."
The biggest and most magnificent Baroque-Rococo palace of the country was built in the spirit of this sentence, in the vast reed-lined, boggy and gamy area of Lake Neusiedl.

The construction and splendour of the palace complex is connected to Prince Esterházy „Bright” Miklós, who was continuously building it from 1762 until his death in 1790, in order to create a residence that is worthy to royal households, where sumptuous celebrations took place day after day. The palace complex was built in 1720, by using the buildings of the smaller aristocratic residence of the 17th century, and between 1762 and 1784, when it got its form of today, in Baroque, Rococo and Louis XVI style. Eszterháza was visited not only by the senior families of the era but Empress-Queen Maria Theresa also visited it, and the great composer Joseph Haydn also lived and composed here, as well.

The park of the palace and the associated landscape is the most matured creation of the Baroque garden art works in Hungary, and at the same time, an ambitious and exemplary appearance of the Baroque landscaping, even by European scale.

The park and the landscape, formed according to the plans of Ferenc Zinner and then – presumably - Jacoby, is one of the cleanest composition of the European Baroque landscape architecture in terms of style, and the world's only Baroque landscape system with two focuses, the main lines, essence of composition and characteristic elements of which are still recognizable and can be reconstructed even nowadays.

Even the very existence of Eszterháza is the inevitable manifestation of our Europeanism. And if we unite, by means of the appropriate music programs, Haydn's art with the – renewing – palace again and inseparably, it will become one of the key elements of Hungary’s cultural identity within a short period of time. Eszterháza is one of the most important sanctuaries of the European musical culture – we can make the best of the exceptional opportunities implied in one of the most valuable treasures of our national heritage only with this in mind.