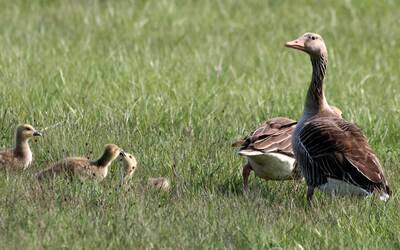 In the past centuries even a ferry operated in the village of Sarród people, who did mainly fishing, reed and bulrush processing for their living, but due to the continuous drainage of the area, Neusiedl has shrunken. Thus, the port of Sarród was no longer needed.

The central building of Hungary's fifth national park, the so-called Kócsagvár (Egret Castle) stands in that place today, it was brought into use in 1993. It was named after a local bird, one of the typical representatives of the local avifauna, the big egret. The essence of this symbolic naming was that this bird species, known also as the symbol of the nature protection in Hungary, hatches eggs again around Neusiedl in large amount, as a result of the rational landscape and nature conservation.

The designer of the building, Mr Jozsef Koller has followed the organic architecture hallmarked by the name of Imre Makovecz.

The Flora and Fauna of the Hanság Exhibition

Hanság Landscape Protection Area was established in 1976 with the aim of preserving the remains of the former diversified swamp nesting site of Hanság. The Flora and Fauna of Hanság Exhibition was established in 1981 at the edge of the protected area in Öntésmajor, a small village 7 km from Kapuvár, in order to show and represent the history of the area and the still valuable wildlife of Hanság, which has been changed due to and following the previous procedures being significantly transformative to the landscape.

The exhibition, featuring also elements of old boards and dioramas, and increased by interactive elements, too, provide information on the flora and fauna of Hanság by meeting the expectations of our days. The presented materials can be seen in four rooms, in the corridor and in the reception hall. Among the showrooms, one of the real specialties of the exhibition is the room presenting the nocturnal animals of Hansag, completed by animal sounds. Visitors can have a look at on locomotives and wagons remained and rescued from the times of farm railroads of Hanság, in addition to old steam engines, in the yard around the building. Additional interesting interactive outdoor games related to natural sciences are also available for the young; they support for spending the time usefully in the exhibition. 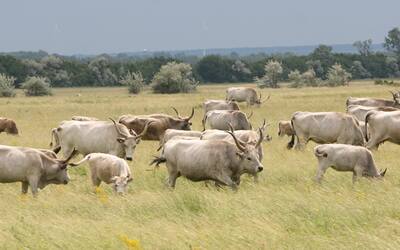 A new national park visitor place with exhibitions, showing the old Hungarian domestic animals, has been established in Laszlómajor (Laszlo Manor) - in the centre of the former Esterházy Manor - located in the area of Fertő-Hanság National Park. The main attractions of the open farm, which presents the former farm village life, are the old Hungarian domestic animals. More than 300 specimens of 15 indigenous species can be seen, such as the Hungarian Gray Cattle, the domestic buffalo, Hungarian sheep variety “Racka”, the Cikta sheep, Milking Tsigai sheep, mangalica pigs and some eminent representatives of Hungarian poultry breeds.

A 120-seat conference hall, an exhibition introducing nature protection and nature management history of Neusiedl region and Hanság, an other exhibition representing crafts related to animal keeping, and a playground are available for those interested in the building complex designed for tourism attraction.