Home »
Hotel »
History of the hotel 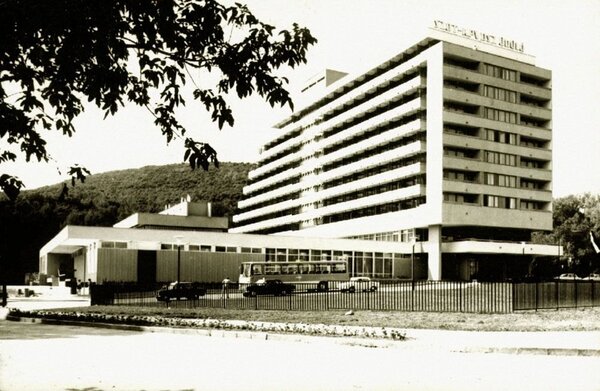 ​In the late 1960s, the Trade Union for Workers of Business, Finance and Catering Trade (Hungarian acronym: KPVDSZ) and National Council of Trade Unions (SZOT) Directorate-General of Recreation and Sanatoriums agreed on building holiday resorts in order to increase capacity. As a result of this, they made decision about building the nine-story KPVDSZ holiday resort up, as well as they decided that all costs thereof had been covered by KPVDSZ trade union. The 600-bed hotel belonging to the trade union was inaugurated in Sopron on 23 August 1973. 288 en-suite rooms with balconies were available for the guests in the SZOT-KPVDSZ holiday resort surrounded by a six and a half hectares park and sports facilities.

Guests, who arrived with a SZOT voucher, took 2-week turns. 600 guests spent time in the resort in every two weeks, about 11 thousand guests in each year. The hotel was awarded five times with Certificate of Merit and praised as Excellent Resort four times by the KPVDSZ Trade Union and SZOT Directorate-General of Recreation and Sanatoriums between 1973 and 1983. 60 % of the 120-member staff worked in socialist brigade. Breakfast, lunch and dinner were served in turns, with 3-3 kinds of menu selection. Entertainment of the guests was provided by a librarian and a person responsible for culture, by means of welcome and goodbye parties, sightseeing tours and other programmes.

Hotel Szieszta of today is very popular. The aim of the hotel's management and staff is to preserve and strengthen the reputation of this building with a great past.

Schedule of the construction: