Become acquainted with the attractions of Sopron! 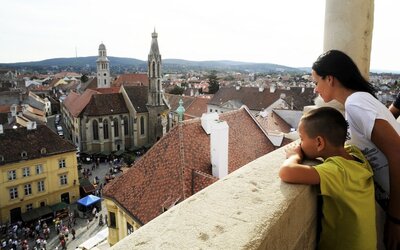 Winding streets, charming squares, arched entrance doors and ornamented balconies of houses, monuments, historic and civic buildings and pieces of the city walls coming into sight here and there in the inner part of the town compose a unique artistic unity. Sopron is “the most urbanized town in Hungary".
Walking along the streets of the town seems as a return back to the Middle Ages. The greatest number of monuments can be found here – second after Buda – and its museum network has been the first in the country. Conquerors and tribes with the intention of expanding, who had been appeared around here, all have left their imprint for today.

The gem of Main Square is one of the most beautiful masterpieces of the Hungarian Baroque: the Statue of Holy Trinity - or the plague column, as it is popularly called - whereon twisted stone column was formed at the first time from so-called Lajta limestone quarried in Fertőrákos. It was made by Jakab Löwenburg in order to save his wife, Katalin Késmárki Thököly from the plague, between 1695 and 1701. The epidemic could not been overcome that way – his wife had been already dead by the time of unveiling the statue in 1702. 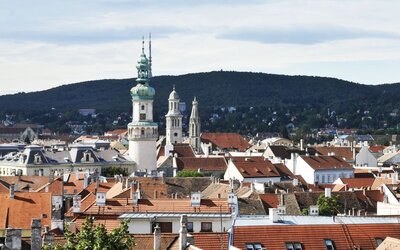 Fire Watch Tower is the symbol of loyalty. In the referendum held on 14 December 1921, Sopron and eight other villages expressed their wish to stay a part of Hungary. In commemoration of this event a Baroque style gate frame was constructed in 1928 based on the plans of Rezső Hikisch, with a sculpture group “Hungary-admirer Sopronians” above it, the work of Zsigmond Stróbl Kisfaludi. After climbing up the spiral staircase of nearly 200 steps, visitors can admire the wonderful panorama over the historical town from the balcony, the former watch-post of the tower guards.

This is one of the most beautiful buildings in Sopron; this palace-like Baroque corner house is one of the jewels of Main Square. In the 15th century it was owned by the Haberleiter family, who provided accommodation for King Matthias of Hungary in the winter of 1482-83, when the king was besieging Vienna. The building became the property of the Festetics family in the 18th century, and it got its final form then. Storno family bought the house in 1872, where Ferenc Liszt gave concerts as a guest in 1840 and 1881. The characteristic features of the house are the two storied closed corner balcony with rich ornamentation, the arched gate between Tuscan semi- pillars and decorated by the Festetics coat of arms, and the beautifully carved Pelican knocker. Sopron’s first pharmacy called “Fekete Elefánt” (the Black Elephant) worked here in the house in the 15th century. 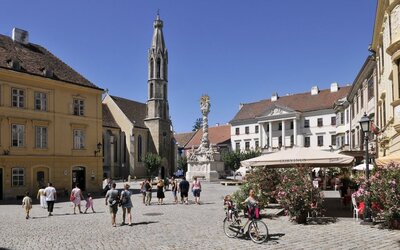 The Franciscans living in Sopron first built their monastery in the centre of the town, and later – around 1280 - their church, one of the most outstanding works of the Hungarian Gothic architecture. Even kings and queens were crowned in the church, and numerous parliamentary sessions took place there, too. Its well-proportioned, finely-architectured tower is one of the most spectacular buildings of the unrivalled Main Square. Masterpieces of fresco painters and other artists, lancet windows, and unique Capistran pulpit are of extraordinary value. The monastery's Louis XVI style door on the south side leads to the Chapter House, which used to serve as a prayer house, later as a burial chapel, and finally it became Loretto chapel.

One of the curiosities of the building is that archaeologists have discovered the remains of Roman baths underneath the house. Its Gothic hall is wonderful, but the loggia in the courtyard built in the 17th century and the Gothic and Baroque cellar of the rear building also deserve special attention. The owners of the building have always been rich and prestigious citizens and traders. The denominator - Endre Fabricius mayor and magistrate - purchased the house in 1806. Stone relics from Scarbantia, the Roman predecessor of Sopron, and its surrounding region are exhibited in the cellar: tombstones, altar stones, sculptures, stone urns and sarcophagi. The imposing hall of the mediaeval basement provides worthy environment for the several-meter high statues of the gods of Capitolium. The archaeological exhibition "Three-thousand years on the Amber Road" can be seen on two floors at the back of the building. Changes in civil housing culture of the 17th and 18th centuries can be followed through the objects of the time and masterpieces of furniture art on the first and second floors in the front wing. It can be observed how the earlier puritan furnishing had been replaced later by a more prosperous interior design of higher level.

Hungary's first "monument protection" measures are related to this house. During the reign of King Lajos II, the City Council wanted to destroy the building in order to enlarge the square, but the King denied his approval, claiming that the demolition of the house would disrupt the harmonious beauty of the Main Square. The former Angel Apothecary operated in the house from the middle of the 17th century, and it had been the home of a number of families of chemists and doctors since that time. The exhibition takes the form of an old chemist’s shop - the counter, the cabinets and beautiful dishes are from the beginning of the 19th century. The Altwien-style china gallipots with angel-head decoration and phials with alchemist-markings are especially beautiful. Another curiosity is a midwife's certificate signed by Ignác Semmelweis. Besides the old appliances of pharmacy and medicine-preparation, the material remains of traditional medicine, quackery and superstitions are also exhibited.

Scarbantia - nowadays Sopron - was one of the border stations of the Province of Pannonia in the former Roman Empire. Its outstanding role was due to its location on the important commercial route, the Amber Road. The centre of the town, which is the downtown today, was surrounded by a castle wall and a moat in the Middle Ages, which fortress system also influenced the formation of the pattern of the streets. The centre of the Roman oppidum was the Forum, the most important building of which - the Capitolium Church - was discovered in the winter of 1893, during the construction of the City Hall. There were large spaces between the columns to provide a view of the gladiators’ games, exchange offices in the peristyles and balconies upstairs. Scarbantia was a typical Roman town; travellers from Italy could find everything that was usual for them at home: a crowded market, sanctuaries of their gods, a comfortable bath, and of course, the gladiator games.

The exact date of the Jews’ settlement in Sopron is not known, but it is sure that about 10-16 families had lived in New Street (Új utca) already in the 13th century. Although the Jews of the town dealing primarily with commerce and finance were not really rich, they had built the Gothic synagogue, that is a unique piece of architecture in Eastern Europe, at the beginning of the 14th century. A corridor from the entrance leads to the main hall, the Gothic main door of which, decorated with a tympanum, and the two side consoles originates from 1300, the time of construction of the synagogue. The two focal points of the synagogue are the Aaron alcove and the pulpit. The Aaron alcove is decorated with a richly-ornamented stone frame and a tympanum, with motifs of grapes and leaves on it, fashioned in the colours of nature. Only the foundation of the hexagonal pulpit is original, however, its layout, stairs, high railings and East-oriented reading-stand follow the original design. Women had separate house of prayers with own exit; the events in the main hall could be followed by them only through the narrow window slots. Another exciting part of the monument museum is the ritual bath. The Jewish religion has always differentiated between clean and dirty things, so baths have always played an outstanding role. The laws of Moses ordained submergence in clear running water, but it can be performed here only with the natural water of the fountain. The Jews were expelled from Sopron in 1526, thus the synagogue started to fall into decay; later it was converted and divide into private homes. This extraordinary beautiful building regained its original beauty during the restoration works of 1967. This is one of the most beautiful buildings in Sopron; this palace-like Baroque corner house is one of the jewels of Main Square. In the 15th century it was owned by the Haberleiter family, who provided accommodation for King Matthias of Hungary in the winter of 1482-83, when the king was besieging Vienna. The building became the property of the Festetics family in the 18th century, and it got its final form then. Storno family bought the house in 1872, where Ferenc Liszt gave concerts as a guest in 1840 and 1881. The characteristic features of the house are the two storied closed corner balcony with rich ornamentation, the arched gate between Tuscan semi- pillars and decorated by the Festetics coat of arms, and the beautifully carved Pelican knocker. Sopron’s first pharmacy called “Fekete Elefánt” (the Black Elephant) worked here in the house in the 15th century.